Every year the Kinsmen Club of The Pas presents our annual Rookie and Kinsmen of the Year awards at the final meeting of the Kin year.   This year was a little different, with the club hosting the District 2 Convention and the majority of club members bringing their significant others to the Governor’s Ball, the club asked Governor John DeBeer permission to present these prestigious awards along with the other district awards that were handed out and he graciously acquiesced.

This year was a very tough decision for the club when it came to casting their ballots for rookie of the year.   The club added 7 members between January 1, 2016 and December 31, 2017.   The award went to Josh Lamontange, who served on the executive as a director and was instrumental at many of the club’s service project throughout the year.

A year ago, the club had a first in their 57-year history when Drew Tritthart took home both awards and after the votes were counted this year we had a tie for the first time in club history.   Mike Roberts and Domenic Granata won in a vote that saw 11 different members receive a vote.

Mike Roberts took on some huge roles in the club this year; he served as Membership Director, co-chair for Comedy Jam, and co-chair for the District Convention that was a huge success.   Mike also was awarded the GEM award for Kin Canada; this award is for a member who sponsors 3 new members in a 12-month period.

Domenic Granata also took on some huge projects throughout the year.   He served on the executive as a Director and chaired the ice shack raffle.   Domenic was awarded the Maple Leaf Award of Distinction from Kin Canada; this award is for members who demonstrate commitment to Kin in their first two years with the organization by earning points through a variety of activities.

“I can’t stress enough the pride that I have for the members of our club,” says President Kevin Carlson, “every project big or small; these guys put their entire heart and soul into, to ensure that the Greatest Needs of our Community are met.” 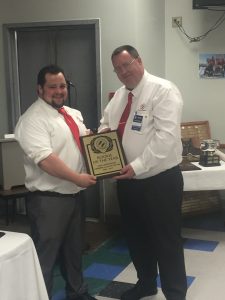