Well, I did it. It’s done. After months of training and preparation, I’ve completed my Marathon for CF. Thank you to all my friends, family, fellow Kin, and community members who have provided me with support and motivation throughout this entire process. On days where I didn’t want to train, or felt tired or unmotivated, I thought of all of you, who have been cheering me on all the way, and that helped me to get out the door and train. And it paid off.

The Marathon by the Sea was a great success. I ran my heart out, there was blood, sweat, and tears, and at the end of the day I felt I did the best I could have done. My goal going into the race was 3 hours, 10 minutes. I crossed the finish line today in 3 hours, 8 minutes, 53 seconds, good enough for 6th overall out of 55 runners, and 2nd best in my age group. I was proud to show my Kinsmen colours, to have “The Pas, Manitoba” blare over the loudspeakers when I crossed the finish line, and to dedicate this race to people living with Cystic Fibrosis and those we’ve lost to CF.

I like to write race reports of the races I do, as a memento and a training tool, so I’ll include that in this blog. Check it out if you’re curious as to what goes through my head as I’m racing.

For Marathon for CF, there is one other task that must be done before I can consider my campaign complete. On Wednesday I will fly to the Kin Canada national convention, where I will present a cheque to CF Canada on behalf of the Kinsmen Club of The Pas and Marathon for CF. As of today, we’ve raised an amazing $3289.20, all of which will go towards finding the cure for CF, and that is what makes me more proud than anything. Thank you again to all those who have donated.

Saint John’s course is quite hilly and very challenging. I knew this would pose a bit of a challenge for me as I don’t live near any hills to practice on. My strategy for hills was to slow down on the uphill and don’t gas myself, and coast down the hills with quick turnover and try to make up the time.

The weather this morning was cool and foggy with some drizzle. No major rain in the forecast and wouldn’t have to contend with the sun or heat, which would work in my favour.

Pre-race routine consisted of waking up at 6:00, eating breakfast of bowl of Mini-Wheats, slice of toast with PB and honey, and a coffee. Puttered around the house a bit and then drove to the race site at around 7:00. I wanted to conserve energy so my warm up was pretty brief – some marching and bum kicks to get the blood flowing in the legs, and some dancing and jogging on the spot to get my heart rate up. I reasoned that with the mass start of all events at the same time, that navigating through the herd in the first mile would serve as the rest of my warm up.

Sure enough, the first couple miles was pretty congested, and I spent most of the first mile just trying to find a decent lane to run in so I could get up to speed. Once the runners had sorted themselves out, I settled into a comfortable rhythm.

My goal for the first half of the race was to keep my mile splits right around 7:15 (On pace for 3:10). Then if I felt really good at the halfway mark, I would speed up to 7:00 splits for the second half (for as long as possible). I did feel really good, and that 7:15 pace felt almost too easy for the first few miles, but I forced myself to stay reserved and conserve my energy, and found a decent half marathoner to pace with. We exchanged leads back and forth for the first 6 miles, until the half marathon turnaround. I was in good spirits and at the next aid station the volunteer asked me if I wanted water or Gatorade, and I asked, “Got any beer?” But I don’t think she got my joke so I said water would be fine.

This part of the course took us out of Saint John and onto a highway, which was (relatively) flat. This section was fairly uneventful; I could just make out a couple runners through the fog in the distance ahead of me, so I just kept them in my sights and focused on my form. I took advantage of the flat part of the course and my splits sped up a little bit through this section, but I did a bit of an assessment and my legs were feeling awesome, my breathing was good, and my form was okay, so I figured why not. I hit the halfway point in 1:33.53 and figured my 3:05 might still be in range considering I had gained a lot of elevation and the second half would be a net downhill. I passed the fastest female at the turnaround and took solace in the fact that I was closer to the finish line than the start line.

Well, I was in for a bit of a surprise. While technically the course was mostly downhill, the downhills were all steep grades that forced me to brake, and were giving my legs a beating. The uphills were equally steep and forced me to shorten my stride and slow down. You can see the variation in my splits in this section, due to the constant up/down of the course despite keeping my effort level the same. I could feel my feet getting a bit sore at this point, and my left hamstring feeling a bit tight, but my form was still fairly good I thought, so I continued to push and try to keep my pace strong. I did pass one runner in this section who had to walk due to the hills being so challenging.

I had gotten this far with fairly consistent splits, only mild aches and pains, and still holding good form. Compared to my first marathon where I hit a wall at about 20 miles and cramped up pretty bad, I was feeling awesome. I mean, it still sucked, but it was better than last time. I gave myself permission to go all out in the last 6 miles and see what I was capable of. At this point I knew my 3:05 wasn’t going to happen, not after that brutal section of the course, but 3:10 was still well within reach if I could maintain a good pace.

The hills seemed twice as high now because my legs were beat up pretty good, and I slowed down considerable on a couple hilly sections. Most notably a km long bridge over the harbour during mile 25 that was a constant uphill grade. But after the bridge, it dumped me out on the final straightaway, where I could see a guy about 300 feet in front of me. My chase instinct kicked in and I told myself I’m gonna get him. I kicked it into another gear and was gaining ground when my left hamstring cramped up and buckled me. I swore and regained my composure, and then I heard my wife screaming my name. I kicked it into an even higher gear and gave a final burst of speed and blew by him with the finish line in sight. I crossed the finish line, nearly fell into the volunteer at the finish line, and celebrated my new PR of 3:08:53, good enough for 6th place overall out of 55, and 2nd in my age group.

All things considered, I felt about as good as one can feel after a marathon. Legs heavy and stiff, some pretty bad chafing in places I don’t want to mention, but much, much better than my previous marathon where I could barely stand afterwards and had no energy for a final kick. I can say the Pfitz plan definitely worked for me, and for my next marathon I will probably use a similar plan, maybe the 18/70 with a longer buildup.

I’ve already signed up for the WFPS Half Marathon in Winnipeg in October, where my goal will be to break 1:30. In the immediate future, I will be focusing on recovery, taking a few days off running and doing some hiking and walking, and celebratory post-race drinks. I think I’ve earned 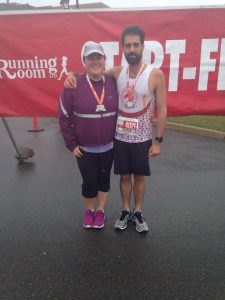 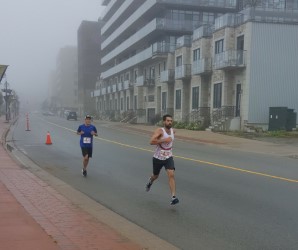