5 members of The Pas Kinsmen made the trip to Kin Canada’s national convention in Halifax from August 16 to 19. While the trip was planned as the annual bi-yearly trip for the club’s past and current president’s (Kevin Carlson and Jason Oswald), meetings for the incoming district governor (Dave Roberts), a marathon and fundraiser (Danny Halpin) and an opportunity to compete in the public speaking contest (David Harmon); it turned out to be a celebration of the club on a national level.

During the Service Gala that takes place on Friday night on the convention, the club was a finalist for the Hal and Elspeth Memorial Service award. The award celebrates the very best service projects from across the country. Finalist included beautiful new playgrounds, Santa programs for underprivileged kids, and multiple projects that see clubs take to the streets to feed homeless.

The Pas Kinsmen submitted the work we do annually for the Northern Manitoba Trappers Festival with the World Championship Dog Race and other associated races. With 1400 hours spent each year working and planning the event, the club is very proud and wanted to share it with the 400+ clubs across the country.

Well after all the submissions were presented, we were surprised to hear our name called. WE WON!!!!

“As a member of The Pas Kinsmen club I have never been prouder to represent our club with Danny Halpin, David Harmon, Jason Oswald and Kevin Carlson to go onto the stage and accept this award on behalf of our club.” states life member Dave Roberts. “This award has been 55 years in the making. Many thanks go to the Northern Manitoba Trappers Festival for giving us the ability to run the race the way we want to run them. I also believe that this a community award where we can all feel proud that we have been recognized by our National Association.”

That wasn’t the end of the evening either. Later, Cystic Fibrosis Canada presented awards for the top service projects that are dedicated to Cystic Fibrosis. The Pas Kinsmen have won this award in 2012, for the tele-a-thon the club organized to help Achahk Dumas-Ward with expenses related to his battle with Cystic Fibrosis. This time we submitted our Goals for CF campaign that we have undertaken for past 17 years with the OCN Blizzard. In 2016/17, the campaign raised $1200 and an amazing amount of awareness for Cystic Fibrosis.

“As the Past President of the this amazing club, I cannot thank the guys enough for the enthusiasm that they bring every week to our table and the way our communities rally around the initiatives that we take forward be it the Drive One For Our Community, the Goals for CF at every Blizzard game or the huge undertaking that we are planning for September 2nd with the True North Tough Mud Run to build an outdoor rink for the youth; the support for the Kinsmen Club of The Pas is truly PHENOMENAL,” notes Kevin Carlson.

The Pas Kinsmen want to thank the entire community for their support. It is not without the support of the Northern Manitoba Trappers Board of Directors, the Board of the OCN Blizzard, the town of the Pas, the RM ok Kelsey, the Opaskwayak Cree Nation, and the many people that call the region home, that we can host the events, fundraisers and projects that we do.

In addition to the 2 amazing club awards, the club also received: 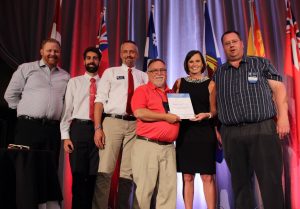 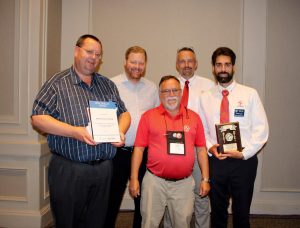